This annual project fosters collaborations between artist and scientist pairs to create a unique, collaborative and more accessible view of scientific research to museum-goers. 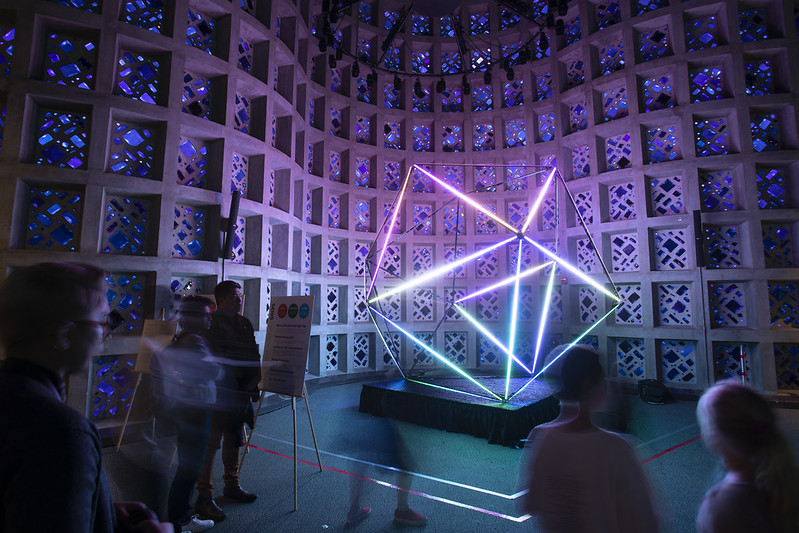 ACCESS 2018 is inspired by one of NYSCI’s foundational exhibits that took place in the Great Hall, the iconic building designed by architect Wallace K. Harrison for the 1964-65 Worlds Fair. The exhibits in Harrison’s “Cathedral of Science” engaged visitors with the exciting potential for space exploration with a spectacle-making animatronic rocket ship and Frank Capra’s documentary, Rendevous in Space, which extolled the wonders of space exploration. This year’s ACCESS commissions have paired three sets of artists and scientists together for the purpose of co-creating participatory performances, large-scale/site-specific projections, and interactive installations, which will run at the museum throughout the ACCESS: Space Exploration Festival, the weekend of October 12 – 14, 2018.

ACCESS 2018 – Conversation with Artist and Scientist Pairs
Saturday, October 13; 5 – 6 pm
Learn about the ACCESS 2018 collaborations from the artists and scientists themselves, as they discuss their projects and the process of working together. Free with NYSCI admission.

ACCESS 2018 – Meet the Artists and Scientists
Saturday, October 13; 6 – 8 pm
Meet the artists and scientists behind the ACCESS 2018 projects while experiencing their work.
This event is FREE and offered in collaboration with the Queens Night Market. Guests may enter via NYSCI’s main entrance on 111th Street or rear gate on Science Avenue.
Cash Bar. ID required.

CHiKA
CHiKA is a Japanese-born, New York-based new media artist. Working as a graphic designer in the commercial industry and the underground experimental audiovisual scene for a decade in New York City has strongly influenced her artistic practice, shifting it from a one-way communication to the audience into a fully interactive experience that uses technology to establish a moment of co-creation with the public. Her work creates what she describes as the symphonyof light: creating minimalist geometric shapes and visuals that explore dark space, while inviting people to reinvent themselves through the relationship between objects and visual images. Light and sound are the main elements she uses in her installations, which are ultimately a visual performance that experiments with improvisational communication and immediate interaction with the audience in real time.

She graduated with a master’s degree from New York University’s ITP in 2011. She was an ITP resident in 2012, an Eyebeam resident in 2013, a BRIC media art fellow, a resident of The Triangle Art Association Workshop in 2015, a media lab researcher at Metropolitan Museum in 2016, and a participant of Bronx Museum AIM Program in 2016. Her first site-specific interactive installation, SHiKAKU07, was shown at Eyebeam Chelsea in 2013. Her biggest site-specific interactive installation, SEI02, was shown at the Dumbo Art Festival in 2014. She also showed e-Firework and Met Stars as the Met media lab researcher at Metropolitan Museum in 2016. Her work has shown in numerous international venues and festivals, including Metropolitan Museum, the American Museum of Natural History, the Museum of Art and Design, NY Hall of Science, Eyebeam, Harvestworks, the Hammer Museum, San Francisco Art Institute, Centre d’Art Contemporain, Museo Regional de Guadalajara, Matadero Madrid, and International Biennial Contemporary Art ULA-2010, Mapping Festival, Mutek, Dumbo Art Festival and among others.

Katherine Freer
Katherine Freer is a multimedia designer working in theater, installation, and film. Her work is driven by a love of storytelling and a belief in its power to shift reality. Her background in narrative film, documentary, animation and computer science combine to generate work that is not only aesthetically beautiful, but pushes convention boundaries. Frequent collaborators include Liz Lerman, Ping Chong, Tim Bond, Kamilah Forbes, Stein | Holum Projects, Talvin Wilks, and Tamilla Woodard.

In addition to designing video for the stage, Kate’s installation work has been presented at: the Metropolitan Museum of Art, the New York Hall of Science, the Smithsonian National Building Museum, the Hammond Museum, 3LD Art & Technology Center, Gallery 151, and the Front Room Gallery. Her early video work includes Beatbox Flute Inspector Gadget Remix, a simple yet popular video with over 30 million views on YouTube and People’s Choice Award nomination. In addition, Kate is a Wearhacks NYC award winner, a Helen Hayes Nominee, and an Innovative Theater Award nominee. She has been a visiting professor at Harvard University, Syracuse University, New York University, Wake Forest University, and University of Iowa. Kate received a BFA in film from New York University. She is a member of United Scenic Artists Local USA 829, Wingspace Theatrical Design, and a founding member of Imaginary Media.

Andrew Scoville
Andrew Scoville is a Queens-based, Chicago-born theater director who uses math and science as source material to create theatrical experiences. He is the co-creator, director and co-host of the podcast People Doing Math. The live recordings of People Doing Math have been produced by The National Museum of Math, Strand Bookstore Special Events, The Public Theater’s Under the Radar Festival, Ars Nova Theater and The Sheen Center for Art and Culture. Most recently, Scoville directed Memory Retrograde, with Harunalee Theater Company, which took a unique approach to theatricalizing the science of memory. He is the director of Love Machine, a high-tech, interactive performance in three parts, utilizing actor and audience responsive technology. As part of Love Machine, he was lead director on The Interactivity Salon at 3LD Art and Technology Center, which brought together theater artists and programmers to develop unique ways of collaborating. He has worked on two distinct projects that were created for Bina48, the world’s most advanced social robot.

Scoville graduated from New York University in 2008 with a bachelor’s in theater arts. He has held internships with Theater Mitu, The Wooster Group and Temporary Distortion. As a technician, he toured two of Temporary Distortion’s shows to France, Hungary and Australia. He teaches at Playwrights Horizons Theater School (NYU) and at various public schools in New York and New Jersey through The Metropolitan Opera Guild. He is a member of the 2011 Lincoln Center Theater Directors Lab. He lives in Ridgewood, Queens with his wife, playwright Jaclyn Backhaus, and their son Ernie.

Jackie Faherty
Dr. Jackie Faherty received her bachelor’s degree in physics from the University of Notre Dame in 2001 and her doctorate in physics from Stony Brook University in 2010. After graduate school, she received a National Science Foundation International Research Fellowship (NSF-IRFP), which she took to the Universidad de Chile in Santiago. She then received a prestigious NASA Hubble Fellowship, which she took to the Carnegie Institution for Science. She is now a permanent scientific staff member jointly in the department of Astrophysics and the department of Education at the American Museum of Natural History (AMNH). Dr. Faherty co-runs a dynamic research group at AMNH entitled Brown Dwarfs in New York City (BDNYC), along leading scientists Dr. Kelle Cruz of CUNY Hunter College and Dr. Emily Rice of CUNY College of Staten Island.

Aside from a love of scientific research, Dr. Faherty is a passionate educator and can often be found giving public lectures in the Hayden Planetarium. She holds a unique position at the American Museum of Natural History that allows her to pursue scientific research at the forefront of exoplanet characterization studies, while mentoring and advising education programs for students and general public alike.
http://www.bdnyc.org/about-bdnyc/

Moiya McTier
Moiya McTier grew up in a small coal-mining town in Pennsylvania, with a clear view of the night sky. However, she didn’t begin to pursue astronomy professionally until her sophomore year at Harvard College. At the same time, she was learning from Harvard’s folklore department how to study people and tell their stories. Her college years were filled with struggles brought on by the weakness of her science and math background and rude awakenings about what it means to be a woman of color in STEM.

After graduating in 2016, she continued her education in the astronomy doctorate program at Columbia University. It was there that she realized her double training in scientific research and narrative storytelling made her an excellent science communicator. Now, her professional time is split between doing science, talking about it, and making it easier for people to follow in her footsteps.
http://www.astro.columbia.edu/profile?uid=mmctier
https://news.harvard.edu/gazette/story/2016/04/she-followed-her-star/

Emily Rice
Emily Rice is an associate professor in the Department of Engineering, Science and Physics at the College of Staten Island (City University of New York), faculty in physics at the CUNY Graduate Center, member of CUNY Astro, and resident research associate in astrophysics at the American Museum of Natural History. She is co-PI of the BDNYC research group and a StarTalk All Star, who’s been on NatGeo and several CUNY TV shows. Emily is also co-author of a lab manual for college-level astronomy courses, published by Pearson, and gives public presentations, including at the Hayden Planetarium. She makes fun videos, organizes astronomy presentations at bars, and shares science fashion tips.
https://www.amnh.org/our-research/staff-directory/emily-l.-rice/
http://www.bdnyc.org/
https://www.startalkradio.net/bio/emily-rice/

Choose the membership option that works for you! All include free general admission, discounts on birthday parties and 3D theater shows, and invitations to member-only events.

ACCESS 2017
ACCESS 2017 is inspired by NYSCI’s vintage exhibition, Mathematica, which is comprised of kinetic and static exhibit pieces that demonstrate a range of mathematical concepts.

Solar Cat
April 22, 2019 to December 31, 2020
Solar Cat is the cutest solar panel ever made – and it can charge your phone, too!
Back to top
Waitlist for Professional Development Workshops
Subscribe to Press
Subscribe to STEM Events News